To make aircrafts more economical, environmentally friendly and robust, Fraunhofer engineers from Dresden have developed a new ceramic heat shield technology. In this process, a powder of yttrium-stabilized zirconium oxide (YSZ) is added to water to form a suspension. Quickly and cost-effectively this liquid powder mixture can be sprayed onto turbine blades or other aircraft parts. Such and similar thermal barrier coatings (TBCs) facilitate aircraft engines, which consume less fuel and do not contaminate the atmosphere as much.

Headed by Dr. Maria Barbosa a team from the Fraunhofer Institute for Material and Beam Technology IWS Dresden has now implemented the new technology into industrial application together with the Swiss plant manufacturer AMT. The IWS researchers see great potential for their suspension spraying process in the aerospace industry, but also in the semiconductor industry and many other sectors.

"This allows high-quality and durable protective coatings even on large components at comparatively low cost," emphasizes IWS engineer Dr. Barbosa. "By spraying suspensions instead of powder, we can use materials with very small particles, not previously suitable for this purpose. At this point, we establish a bridge between the state-of-the-art coating processes, all of which have their advantages and disadvantages. In the future, it will also be possible to process novel material compositions." In order to generate such thermal barrier coatings, two technology paths are mainly used so far: Some companies process the components with electron beam evaporators ("EB-PVD") in vacuum chambers. This results in very high-quality and durable coatings. But this process is expensive, especially for coating very large components.
The second technology path involves atmospheric plasma spraying (APS). Powder is melted in a plasma jet and sprayed onto the component. APS is rather inexpensive because it does not require vacuum chambers. But the protective layers produced in this way are not as resistant.

Fine powders can also be sprayed if mixed properly

With the "YSZ suspension spraying", the IWS researchers have now developed an alternative process to use a very fine ceramic powder made of yttrium-stabilized zirconium oxide. The grains in this powder have a diameter of only one micrometer or even smaller. Such particularly fine powders would agglomerate very quickly in classical processing methods and cause clogging of the machine hoses. The engineers therefore mix a suspension with water or alcohol. In this way, the particles can be sprayed. The result is a shielding layer that is about 500 micrometers (thousandths of a millimeter) thick. Since no vacuum is required here, the costs remain rather low. Also, large aircraft components can be coated at relatively high speeds. A coated aircraft turbine can operate at higher temperatures than an uncoated aggregate. For example, the solution developed by Fraunhofer IWS could raise the operating temperature of a turbine by around 150 degrees at comparatively low cost. As a result, it increases efficiency, extends its service life and reduces cooling costs. The bottom line is lower fuel consumption. "The environment is also less polluted since the fuel in the improved engines burns more efficiently, which reduces fuel consumption and accordingly fewer pollutants are emitted," estimates Dr. Barbosa. In order to understand another advantage of new engine coatings, it is worth travelling back in time to 2010: When the Icelandic volcano Eyjafjallajökull erupted, it paralyzed air traffic in half of Europe. In addition to the visibility problems caused by the volcanic ash being hurled up, the airlines were also concerned about potential turbine damage. This ash contains calcium magnesium aluminum silicates (CMAS), similar to the no less harmful fly ash. If this material melts in an unprotected combustion chamber, it can cause considerable damage.

It is precisely against this damage that a high-quality additional layer can help, which does not flake off again immediately. The suspension spraying process developed at the IWS also addresses this problem. "For this application, we work together with the German Aerospace Center and the Technische Universität Dresden," reports Dr. Maria Barbosa. "We want to jointly develop a 'sacrificial layer' so that ash and sand cannot immediately damage the turbine blade itself. This will enable aero planes to reach their destination safely even after a volcanic eruption". The IWS process is also attracting great interest in the semiconductor industry. For instance in chip production, the large microelectronics factories use plasma etching chambers. In these chambers, aggressive fluorine compounds repeatedly destroy the chamber walls. With innovative coatings from Dresden, plant constructors plan to better protect the interior of the machines against corrosion in the future. "We are noticing a large and growing demand from industry for our process – and this from many sectors," emphasizes engineer Dr. Maria Barbosa. "We now envisage opening up further application possibilities. Together with small and medium-sized companies, we are working on an IGF project to make carbide such as tungsten carbide sprayable in a cobalt matrix.

The atmospheric plasma spray (APS) as well as flame spray processes are available at IWS for the coating of components made of steel, light metals or other materials with metals, hardmetals and ceramics. 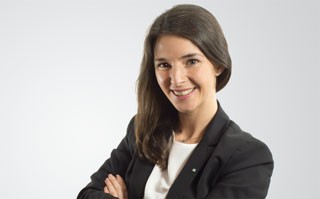