Warehouses are home to heavy volumes of traffic. The numbers of industrial trucks (pallet trucks, forklift vehicles and the like) traversing their aisles are growing especially large – in facilities that are themselves increasing in size all the time. Under these conditions, accidents become an inevitability even if numerous safety measures are put in place. Now, optical sensors on industrial trucks might provide warehouse staff with better protection as they do their jobs. Joining forces with BASF SE and Kinotex Sensor GmbH, the Fraunhofer Application Center for Optical Metrology and Surface Technologies AZOM has developed prototypes designed to ensure added safety during day-to-day activities.

Based in Zwickau, Germany, the Fraunhofer application center is a branch lab of the Fraunhofer Institute for Material and Beam Technology IWS. Through its custom-developed optical sensors, it hopes to achieve a future in which businesses see fewer transportation accidents involving industrial trucks. For this purpose, BASF provided two pallet trucks. “Every day, there are hundreds of industrial trucks traveling around our
factories and warehouses. By working with the Fraunhofer Application Center, we are keen to integrate safety technology into our vehicles so that we can give our
employees even better protection,” says Dr. Christian Fischmann, who oversees vehicle engineering at BASF SE in Ludwigshafen. Together with Kinotex Sensor GmbH, he has been acting in an advisory role as the client in the project. “Our system is designed to protect users from being crushed by machinery, especially in the area around their feet,” explains Prof. Peter Hartmann, director of Fraunhofer AZOM. “To achieve this, our research team has developed a special proximity sensor that detects when an operator is too close to the hazardous area in front of a vehicle, and then applies the brakes.”

Laser pulses and sensors working together

Laser pulses are emitted with a defined length and distance between them and then reflect off obstacles, a process that produces information about how far away objects are. A real innovation in the system is its ability to combine information from multiple directions in space and continuously monitor a fan-shaped area around a pallet truck, which is provided by BASF. The signal from a second optical sensor that responds to pressure is processed using the information about distance from objects – something that has been achieved thanks to the collaboration with Kinotex. The sensor, which is tactile, is able to stop the vehicle and automatically move it back slightly, preventing the operator from becoming crushed. This ability to make pallet trucks reverse in response to a proximity sensor is a unique selling point of the new safety technology, which has been tested by staff at BASF. Their feedback will be included in additional work on optimizing the technology, and the relevant employers’ liability insurance association will also be on hand to provide the researchers with advice.

BASF is already showcasing both prototypes at specialist conferences and trade fairs – with users and manufacturers alike showing a keen interest. “This technology can be used in practically any transportation vehicle, but it’s a particularly intriguing prospect for autonomous vehicles,” says Dr. Christopher Taudt, Surface Metrology group manager at Fraunhofer AZOM – a role whose remit involves fine-tuning the technology behind the safety mechanisms. “Currently, we’re working on the idea of integrating the sensors into a kind of retrofittable sensor strip rather than making them a fixed part of the vehicle. That would allow them to be added to vehicles of any type from a whole range of manufacturers,” he explains.

According to statistics from the German Social Accident Insurance (DGUV) association, bruising, crushing and fractures are the most common types of injury caused by pallet trucks and forklifts. Known collectively as floor handling equipment, these vehicles travel at speeds of 6 to 7 kilometer per hour and in some cases can weigh more than 500 kilogram without a load. Until now, they have not included any safety technology able to prevent accidents in the area around the feet – so this is where the new system is stepping in.

The Fraunhofer Institute for Material and Beam Technology IWS operates the Fraunhofer Application Center for Optical Metrology and Surface Technologies AZOM in cooperation with the University of Applied Sciences Zwickau (WHZ). Its researchers investigate and develop cutting-edge approaches to optical measurement technology, image processing, process control and surface characterization. The aim is to transfer the outcomes of this research quickly and directly to application-specific solutions for industrial processes. Fraunhofer AZOM occupies a position at the interface between applied research and industry in the fields of medical engineering, vehicle engineering, mechanical engineering and semiconductor technology. 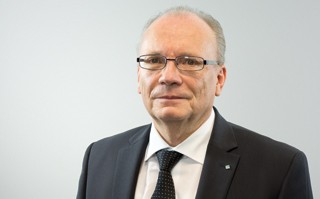